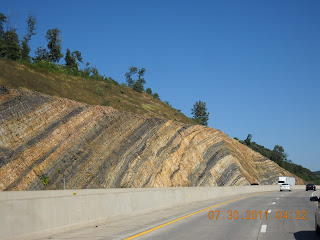 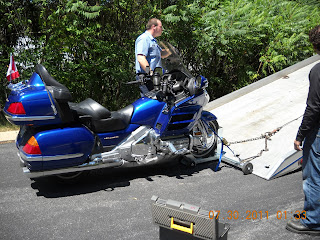 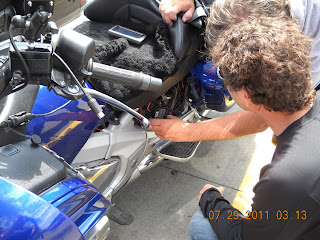 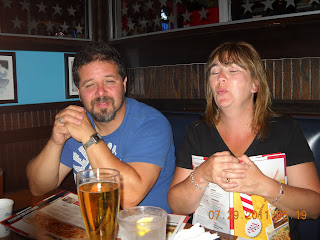 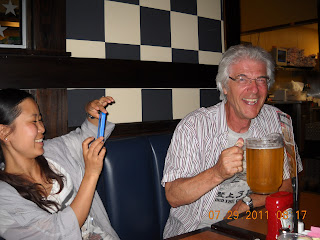 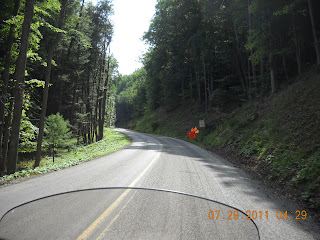 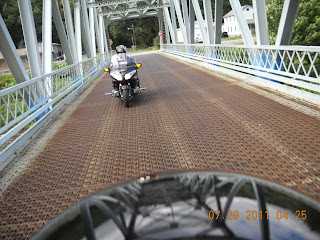 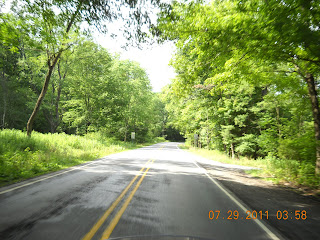 Hey all,
For those of you who couldn't attend the Civic long weekend, we missed you. Unfortunately you missed an amazing ride. It was chocked full of everything the bike gods could throw at us.
We had the rain god start our trip out with a torrential down pour.
We had the border guard god take Hercey in for what we can only assume was the rubber glove treatment
While we waiting for Hercey and Peter, where we were told to wait, we had another border guard who thought he was god tell us to move on. This split up the group for the first day.
We had the bike god strike at Freds bike for the first time while we stopped for gas and a cold drink. No power to the ignition.
At the same place, we had the drink god smile on us when Heather and Kim saw a person leaving the store, put a container of chocolate milk and a bottle of ice tea on the back of their truck than drive off with the obvious results occurring. In the time it would take a beam of light to travel across the parking lot, Kim had come up with a purpose for the ice tea. It happened so fast I didn't quite catch it, something about mix and vodka. We couldn't really use the chocolate milk, so I was volunteered to give it to some kids. Not wanting to be labeled a pedophile, I declined and suggested that one of the women undertake that task. It soon became apparent that giving away an unopened completely sealed container of chocolate milk was going to be more difficult than expected. Ah but when all seems lost, the typical small town back woods inbreeder came along and problem solved.
It would appear I could write a book about this ride, so I'm going to have to cut it short and to say that the ride was excellent! We had such a great time. From eating at the Country Farm House to playing with our alarm systems, it was a fabulous weekend. We really didn't have much luck when it came to finding places to eat. I'm sure that wouldn't have been a problem had Al and Lynn attended.
My hats off to Fred. His research really paid off especially on 125. That was an unbelievable road. There weren't many straights on that road. Fred said, and I agree, "you don't get much better than that".
Heather and I almost collided with a vehicle while negotiating a left bend on 125. I was close to the center line when coming the other way a car approached and he was over the center line. Fortunately I saw him on time and made an evasive maneuver to the right, then had to swerve to the back to the left to avoid hitting the guard rail. I leaned so far to the left, it caused my foot boards to drag on the ground giving off a light show that  Hercey enjoyed. That gave us both a fright, but we are ok. I told Heather we have to just put it behind us and keep going. It's the very first time we had even come close to having an accident.
We had an excellent weekend. Thanks to Fred for all of his hard work. Thanks to Lynn who booked the rooms for us. It was really great to meet Dan and Loretta, great to see Peter and Hercey again. Hercey, I'm looking forward to your next bottoms up challenge.
I am so happy I'm back on the road again and I'm looking forward to the next ride. Labour Day weekend perhaps?