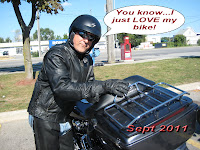 Woke up this morning to a temp of 8*C....brrrrrrrrrr!
By the time I got dressed, putting on my flannel jean pants and an extra T-shirt, the temps rose to 14*C....alright! 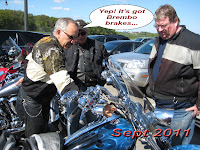 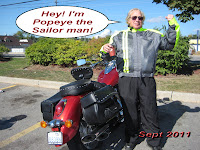 Adrian bundled up  for the chilly ride, he also was surprised of how quickly the temps warmed up
Lucky I had my sunglasses on, Mort rode in with an Olympia High Viz jacket...you couldn't miss him!

Angelo came for a short ride...he had commitments at Casino Rama later in the afternoon. Dan Hill appeared from Newmarket and Steve Morris...what a surprise!

By 10:30 we had decided to ride the scenic escarpment and have a quick lunch at the Boat House in Chippewa. Kickstands were snapped up and the group ready to peel away when Peter Smith slides into the plaza

Lynn and I were fidgeting with the CB radios and came to a conclusion we had a serious wiring problem...we had lost all audio on both headsets...arrrgh! 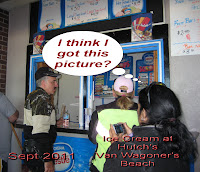 Meandered non-stop westbound along Lakeshore Rd towards Burlington...all the lights were in our favour - greenYou could tell Quarter Horse Mort had enough because once he saw a QEW  (Quick Easy Way) sign at Beach Rd in Hamilton he peeled away 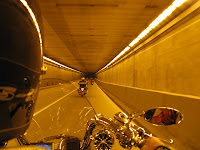 Later at Vineland Estates Winery, Angelo decided it was time for him also to peel away. Dan found his left forearm aching from the heavy clutch lever pull...he has installed a high performance clutch kit for his bike...so, he decided to also peel away

Boogied over to Chippewa Boat House (it was busy)  via Hwy 8 - Lakeshore Rd St Catherines - NOTL Niagara Pkwy. On the return trip, we roared though the Thorold Tunnel picked up the Service Rd and then stopped at Hutch's at Van Wagoner's Beach for ice creamBy now it was 5pm and everyone was anxious to get home...so, we said our goodbyesAdrian and Peter jumped on the QEW while Lynn, Steve and I meandered back via easy going Lakeshore Rd

Turned out to be a fantastic day...the weather was perfect for riding...sunny with a mild fall temperature in the air.

Have to take advantage of these warm days before the real chill in the air appears. By the time Lynn and I  come back from our Mediterranean cruise - mid October - there won't be many days like this left...till then! 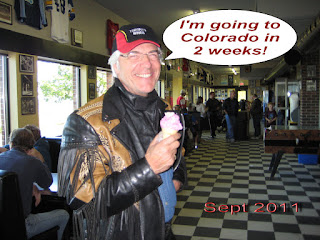 Thanks guys for a super fine day, totally enjoyed it, we did NOT stop at any Tim Horton’s wowo so strange and great....as Al said the ride along the Lakeshore with hardly any stops for lights etc, was fine, 2 hours later we did stop at a Winery for a chat, sorry I missed talking to Mort, next time...Nice meeting the new guys, and chats with the old guys and gals, so fun, thanks for letting me join you today. You 2 guys have a safe boat trip and have fun, I hope Roland and I will be on the road in the next 2 weeks finally for Denver Co AND MORE PERHAPS, aNGELO SAYS HE WILL FORWARD TO ME SOME OF THE ROAds they went over in CO, loo,ing forward to Pikes Peak 14K feet up there in the snow...