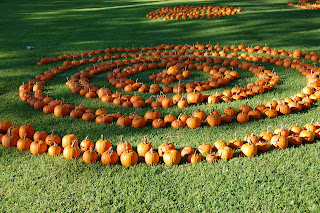 We too decided today to fire up the engines and take advantage of this incredibe fall weather.

Saddled up sometime after noon-ish to take in some of the north of the GTA scenery via the backroads between the sprawling metropolitan Mississauga and the more subdued streets of Alliston...


Sunshine was as plentiful as the encounters with other similar minded folks exploring the various tributaries of blacktop in all directions.

Didn't see Charlie Brown or any sign of the "great pumpkin..." but there was no shortage of plentiful patches of people pickin' pumpkins. (Dare ya... say it three times - fast)

A few wild turkeys, a litle chi-wawa who tried to give us a run for our he money and the occassional squirel making it's way across the roadways made for some interesting distractions. There are some beatufiul homes up along Heritage Road, Hart Lake Road, the various interconnecting sideroads and new builders around the outskirts of Alliston.

Well... back home before it got too chilly (or dark), a couple of hundred K's on the tripometer and a slighly larger carbon footprint to leave behind and we arrived home safely just in time to feed our hungry tummies.

Humm... stabilizer - gonna try to hold out for another week or two. You never know...