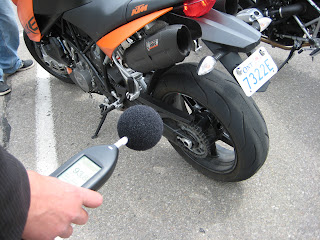 Today, attended Oakville's motorcycle noise compliance voluntary testing at the Town Hall. A new noise by-law 2008-098 specifically targeted to motorcycles comes into effect July 1, 2012. Individuals who violate the noise by-law - a motorcycle exceeding 92 dba at idle or 96dba at 2000rpm - could face a minimum fine of $400 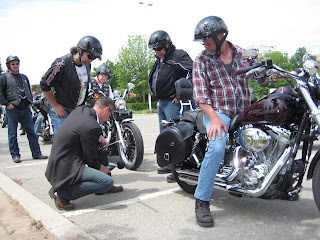 When I arrived, approx 12pm, in the parking lot was a Law Enforcement Officer (LEO) from Halton Region and an Oakville by-law enforcement agent carrying a decibel meter which looked like a microphone. 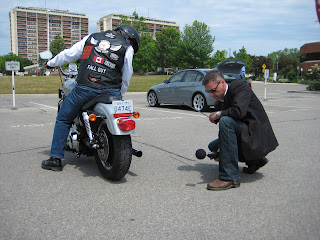 After an hour, of witnessing many bikes either passing or failing the voluntary test. I decided to leave when a dark sinister rain cloud appeared to the west.
The majority of bikes, mainly cruisers, surprisingly passed the casual voluntary test. 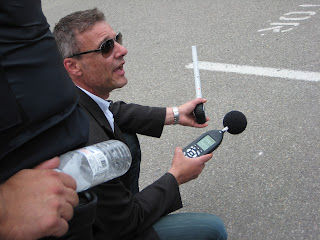 The test consisted of a decibel meter placed 50cm at a 45degree angle from the tip of the exhaust.
Some bikes became compliant when the rider turned down the idle. 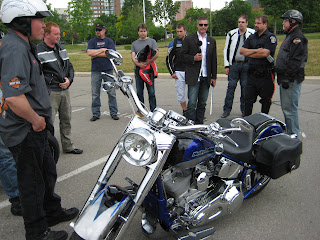 Turned out to be a very interesting and entertaining afternoon listening to every rant, squawk, debate and give their 2 cents worth on the new by-law and loud pipes.
Next date for the voluntary testing is set for Sunday June 24, 2012 at the Town Hall 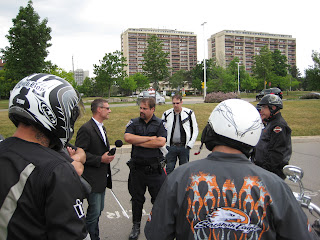