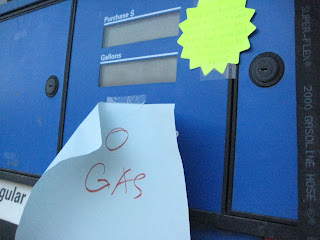 After a quick huddle, Saturday evening, a daunting decision was made to ride out to Deal's Gap the following morning.
Lynn and Donna  booked reservations - via Expedia.com - Holiday Express in Elkins WV followed by an overnight stay at the Hampton Inn Boone NC and then 3 nights at the MicroTel Inn, Bryson City NC 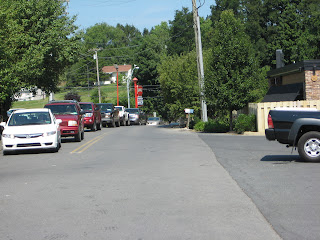 The plan was to travel all the way down Rte219...and then eventually slide onto Bryson City via the Blue Ridge Parkway - America's favourite drive. 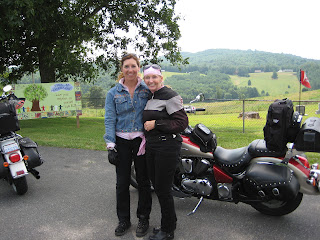 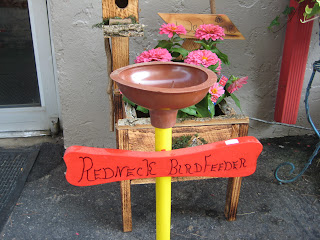 When we arrived at the Holiday Inn Express, the hotel was booked solid.  Initially, we couldn't understand why. Didn't realize West Virginia had been devastated by a huge massive storm on Friday and there were major power outages throughout the whole state. With air conditioners not working in certain counties, the locals took refuge from the oppressive and unrelenting heat wave inside the hotel. Elkins had power. 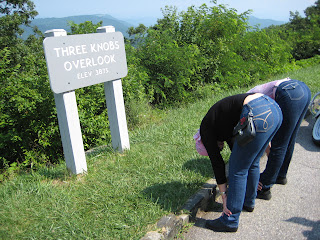 Next morning, Monday, we heard West Virginia was in a state of emergency...Yikes! As we headed down Rte219 we noticed many big trees were blown over and massive devastation. A couple of hours later, pulled into a gas station to fuel but only had to pull back out. Sign on the pumps said "NO GAS!" Station hasn't had power for 3 days. Uh...Oh! 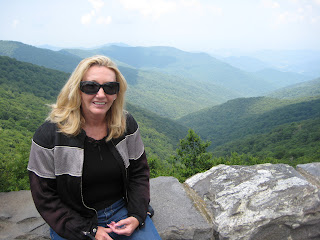 Informed by local, "Next town 18 miles away has power so you'll get gas there!"...(sigh) 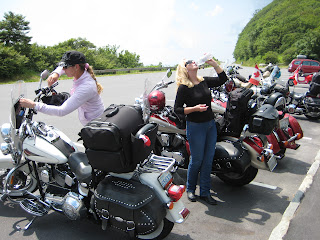 As we approached the edge of town the traffic lights were out - no power - but further we could see cars lined up at a gas station. As I paid for my gas purchase I overheard one of the cashiers say they will be out of gas soon. Holy Moly! Made it just in time! 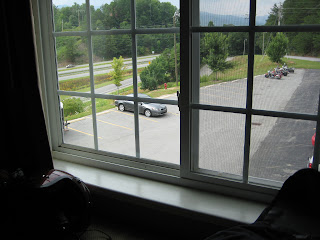 As we cruised down 219 we witnessed more devastation. In some towns the National Reserve Guard - positioned right in the centre of main street - were handing out water ice and provisions to the locals from huge trucks. 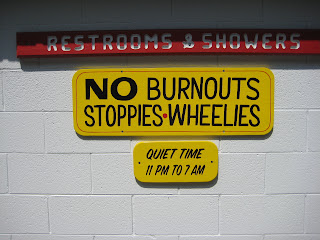 Tuesday morning, jumped on the BRP and meandered along this smooth ribbon of asphalt.
Around noon we veered off the parkway to get some gas. At the end of the ramp a sign said, to the left "Brevard 18 miles" to the right "Waynesville 22 miles". Over the CB radio Lynn directed me to turn left towards the town of Brevard. 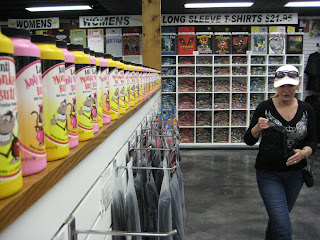 Well, descending down from the ridge this was one heck of challenging road - Hwy276 - with dips and turns. Stayed in second gear powerband all the way down the mountain. Holy Moly!
To my surprise, cruised past Looking Glass Falls  in Pisgah National Forest- we were there in 2005 with Reed and Petra. 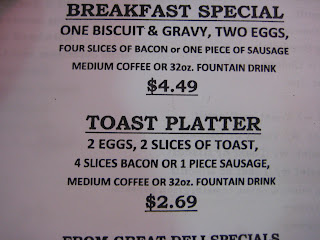 As we were approaching the town of Brevard, dark ominous clouds were forming. As we entered the gas station I saw 2 lightning bolts in the sky...Yikes! As a I paid for gas...asked the attendant the quickest way to Bryson City.
He said, "You go up this road all the way to Waynesville and turn left at 23..." 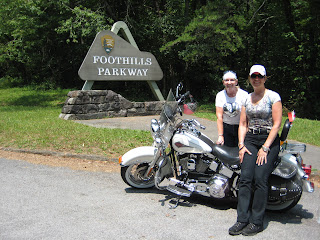 Me, "Hey, I just came down that road...arrrgh!"
He, "Oh, you came down from the Parkway..."
Well to make a long story short, we hightailed back up the road to Waynesville before the skies opened up. 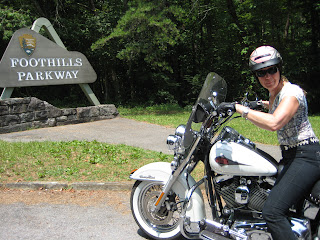 We checked into motorcycle friendly Microtel Inn and then that evening had a sumptuous pecan crusted trout dinner at the Fryemont Inn.
Next day, Wednesday, saddled up and rode  "Hellbender 28" through "The Tail of the Dragon"and the "Cherohala Skyway" 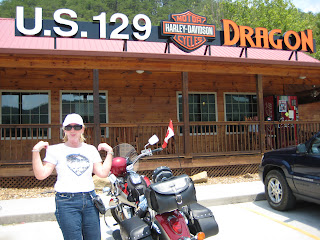 Thursday, rode up Rte 441 through the Great Smoky Mountains National Park along River Rd in Cades Cove. After fuelling in Townsend, picked up the Foothills Parkway. 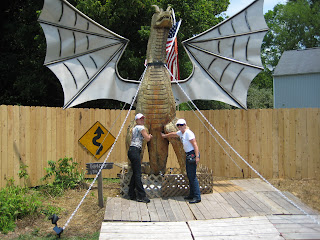 There are a couple of brand new Harley Davidson Outposts in the area. One is on Rte 129 and the other is at the entrance to Cherohala Skyway in Tellico Plains. Popped into the one on Rte 129, and after being told the Harley dealership in Maryville, 30 miles away, is one of the largest in the country - formerly a Lowes store - we just had to check it out. 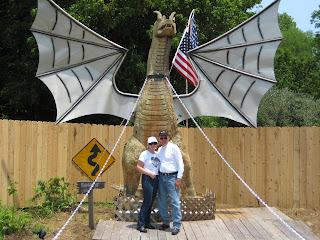 Donna, after buying some boots, couldn't resist adding some Harley T-shirt apparel to her wardrobe.
If you want to see, Terra, the best Canadian work boot commercial "The Protector"...click here! 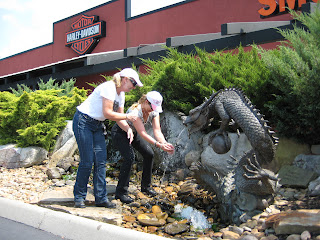 Outside the dealership, the electronic weather thermometer was reading a sweltering 102*F. Oh yeah! It was HOT!
The quickest way back to Bryson City was back through the Dragon. So, before tackling the Dragon, we decided to have a pit/water break at the HD outpost and cool off.﻿
﻿﻿﻿﻿
﻿﻿ 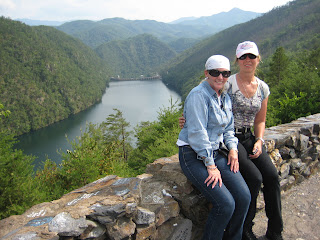 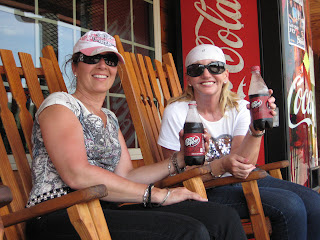 Upon entering the Dragon a roadside photographer was giving me a slow down signal with his hand. As I'm making my lefthander, I come across a State Trooper escorting a huge 18 wheeler out of the dragon...YIKES! If we hadn't had the waterbreak pitstop at the outpost we definitely would have encountered the truck deep in the most curvy part of the Dragon...not good! Click here for a pic.
As we approached Bryson City dark sinister clouds were forming ahead. So, pulled into a church parking and we quickly donned our rain gear but only to ride through wet pavement. The rain had passed.
﻿ ﻿
The closer we approached our hotel the high winds were starting to really whip buffeting our bikes. Small branches and leaves were starting to blow across the highway. Lynn claims she saw some funnel clouds. 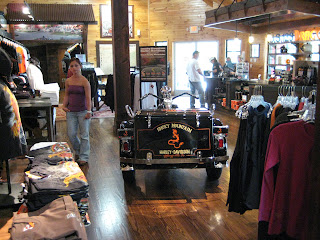 That evening, a biker checking in said...as he came down Rte441 from Gatlinburg many trees were blown down across the road and he had to pull over for about an hour for the storm to subside.
Three people had died in the quick micro burst. One was a biker...a tree fell on him. Terrible luck! His co-rider survived.

CNN U.S.
"Frazier, who was on a motorcycle, died when a tree limb fell and struck him on the head, Jordan said. A passenger on the motorcycle was not injured, Jordan said."
﻿ ﻿ ﻿﻿
Friday headed home. Checked into a Comfort Inn Weston WV. Again, experienced stations with gas shortage and hydro workers and locals staying at the Inn. During breakfast, chatted with one elderly couple who have been at the Comfort Inn for 9 days. There was still no power in their neck of the woods.
﻿ ﻿ ﻿﻿
Saturday morning, as I cruised upRte219 in Elkins WV, not only did I see many roadkill deer on the side of the road I had a deer jump out in front of me...and also had a bear amble across my path a few miles down the road. YIKES!
﻿ ﻿ ﻿﻿
By the time we put our bikes in the stable, that evening, 3700kms were clocked on the odometer for the week.
YeeeeeeeeHaaaaaaaaaa!