Saturday morning 13 bikes coalesced at a Timmy’s oasis in on the exit 38 B off the QEW
The weather prognosticators were promising a fabulous weekend
A huddle was rather an early start for some riders considering they were coming in as far away as , Rockwood and
Tony P, from Rockwood, having just completed a shift had only 3 hours sleep under his belt.


Tony A, from , always has a restless sleep every time an exciting PA trip is planned Monica also informed us she had only a few hours of sleep that night


After a few mandatory border crossing questions we managed to cross into the Excited States in about half an hour... not bad considering in the past we've experienced over an hour delay 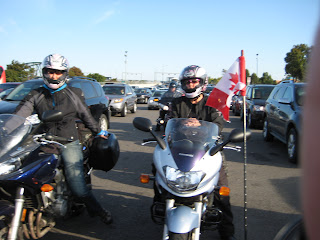 After clearing customs, George on his newly renovated FJR, had to pull over and walk up the I90 onramp to retrieve his inadvertent dropped riding glove
Bruce’s Vance and Hines aftermarket pipes, on his brand new Kawasaki Nomad, have a very deep rumble. Sounds like a tough Chevelle SS 396
﻿
As we made our usual first pit stop, a Citgo gas station in Springville , the morning temps were already hovering in the 70’s.
At our second pit stop, the in Bradford PA, Monica bought a gift for her trusted motorcycle mechanic... a windproof Zippo lighter 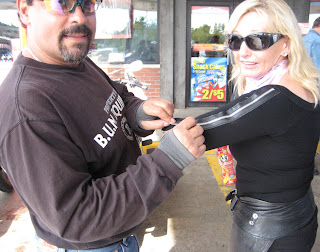 Lunch stop was at the Texas Hot Lunch in A local restaurant famous for their $1.50  hot dogs. A plump juicy hot dog with a squirt of mustard sprinkled with onions and smothered with their famous sauce. The staff are most hospitable fast and efficient. This place has loads of character. One of the owners actually came over to our table and sincerely thanked us Canucks for dropping by. 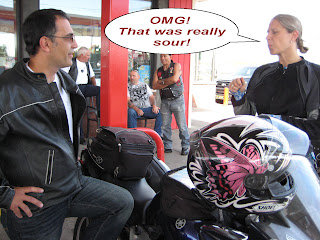 Of course after a hearty lunch an ice cream stop is a must.  Haller’s General Store in Tionesta here we come!
And as promised, the temperature kept rising and riding gear was being shed.
At our stop along the shallow in , Monica had to carefully scale the riverbank to cool off her tootsies.

While meandering along we admired the scenic views of the .
Overnighted at the newly renovated Best Western in Saint Mary’s
Dinner that evening, walked over to a brand new Pizza Hut, formally a KFC, next to the Comfort Inn.
A view out the window early Sunday morning revealed raindrops splattering in puddles…arrrgh!
By the time we finished our continental breakfast we were exposed to a light mist
In elk territory, Hwy triple 5 became increasingly wet and as cars passed in the opposite direction we received a light coating of tire spray
In driftwood pulled into a church gravel parking lot to take our communicators off and don some rain gear. 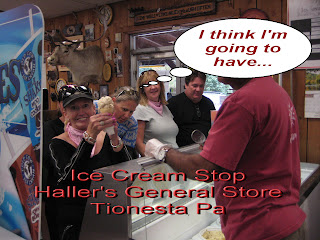 At this juncture Tony P and Jody and Don decided to head straight to our destination hotel in via Rte 120/220 Renovo/Lock Haven
Our posse now diminished to 10 bikes.
While Tony and Don stayed on Rte120 we made a right turn on to twisty Wykoff Run in Sinnemehoning. 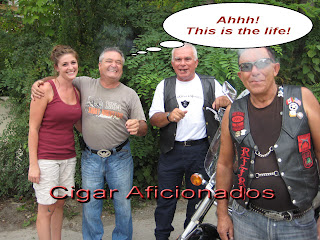 Cruising down Run the rain subsided and by the time we reached the the roads turned perfectly dry for the rest of the day. YeeeHaaa!
For the Sunday we encountered many Amish buggies traveling to social functions.
﻿


For safety, I noticed the Amish have resorted to painting the cab portion of their buggies a yellow/orange color for conspicuity…a first for me.
On a slow left hander on hwy 445, some loose gravel managed to attract Matt's front tire and he lowsided his Nomad. YIKES!
He escaped with a bruised ego, a scraped knee and torn jeans. 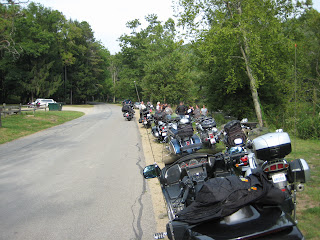 When we arrived at the Comfort Inn Williamsport we given a message informing us Tony and Jodi Don had gone home
Apparently they encountered extreme rain which hampered Don’s vision so they decided to head home and abort their ride. To their chagrin, by the time they reached Ellicottville the sun was shining
That evening had dinner at Ruby Tuesday’s restaurant
﻿


On Monday morning while packing our bikes the skies turned ominous.
When we headed out, the roads were initially dry but by the time we reached Highway 120 at Hyner View the roads became damp and wet…arrrgh!
Sheetz pit stop in Emporium, alarmed Matt informed us he just realized he had thrown out his torn jeans at the hotel which contained his passport and ID.  !
﻿
After a quick call to the hotel Matt, Frank and Angelo did about face and headed back to the Comfort Inn Williamsport
Angelo figured he might as well join Matt because on the way back he can pickup his reading glasses which he left behind at the Best Western hotel in St Mary’s.
Now our posse was down to 7 bikes 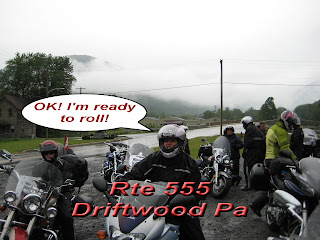 Eventually the skies cleared up and the rest of the trip home was uneventful.
Moral of the story:
You can never trust the weatherman, always pack your rain gear and even though you ride a motorcycle it appears the senior syndrome might eventually creep in. 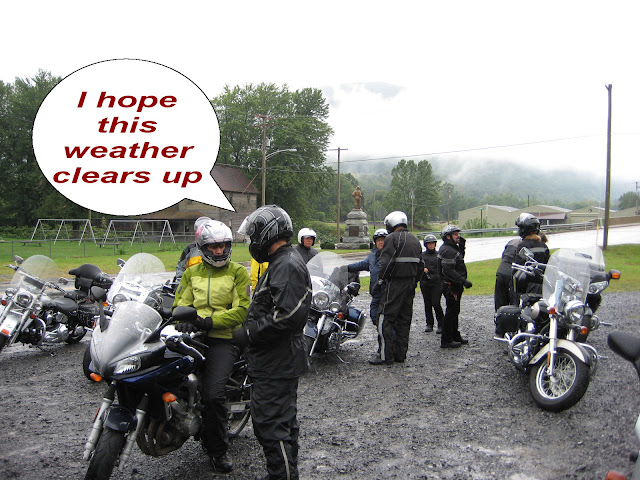 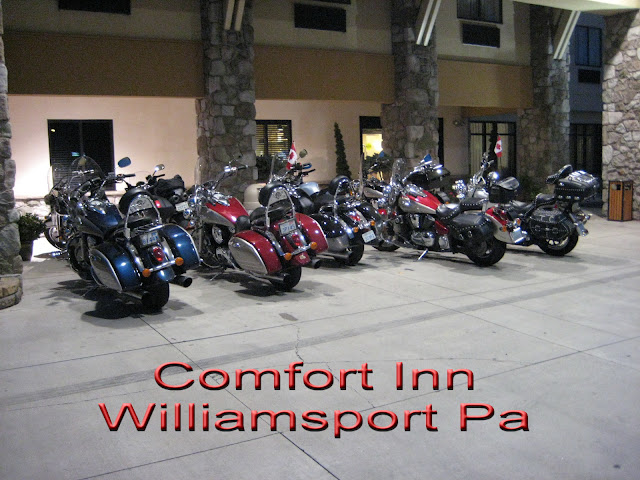 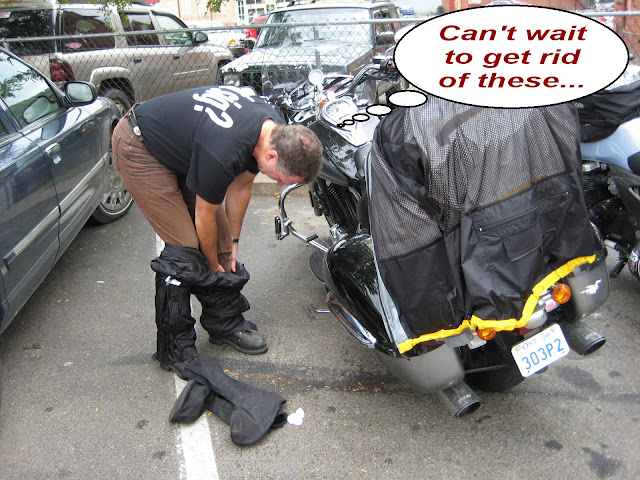 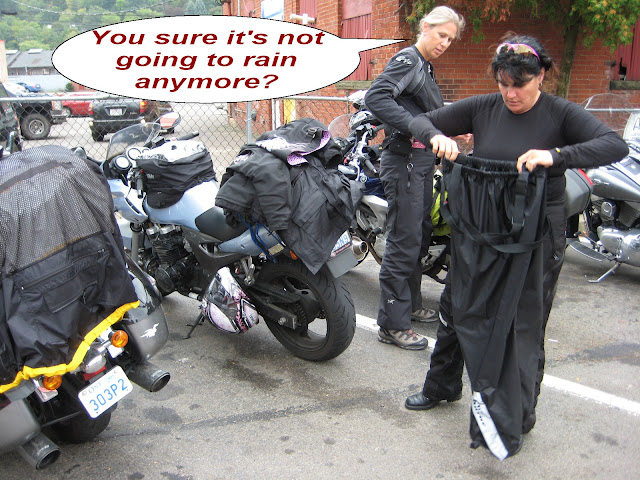 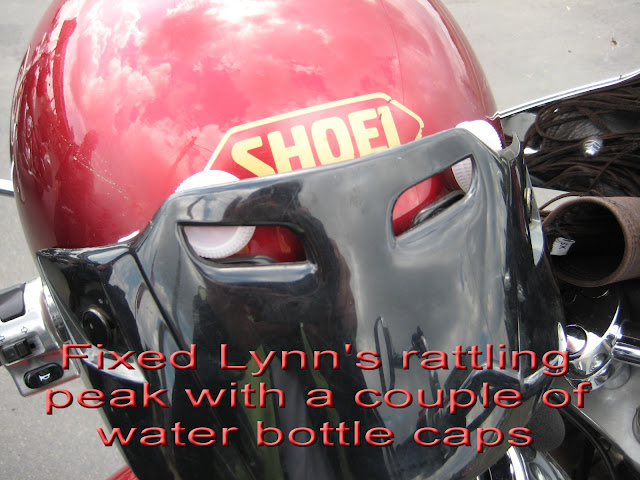