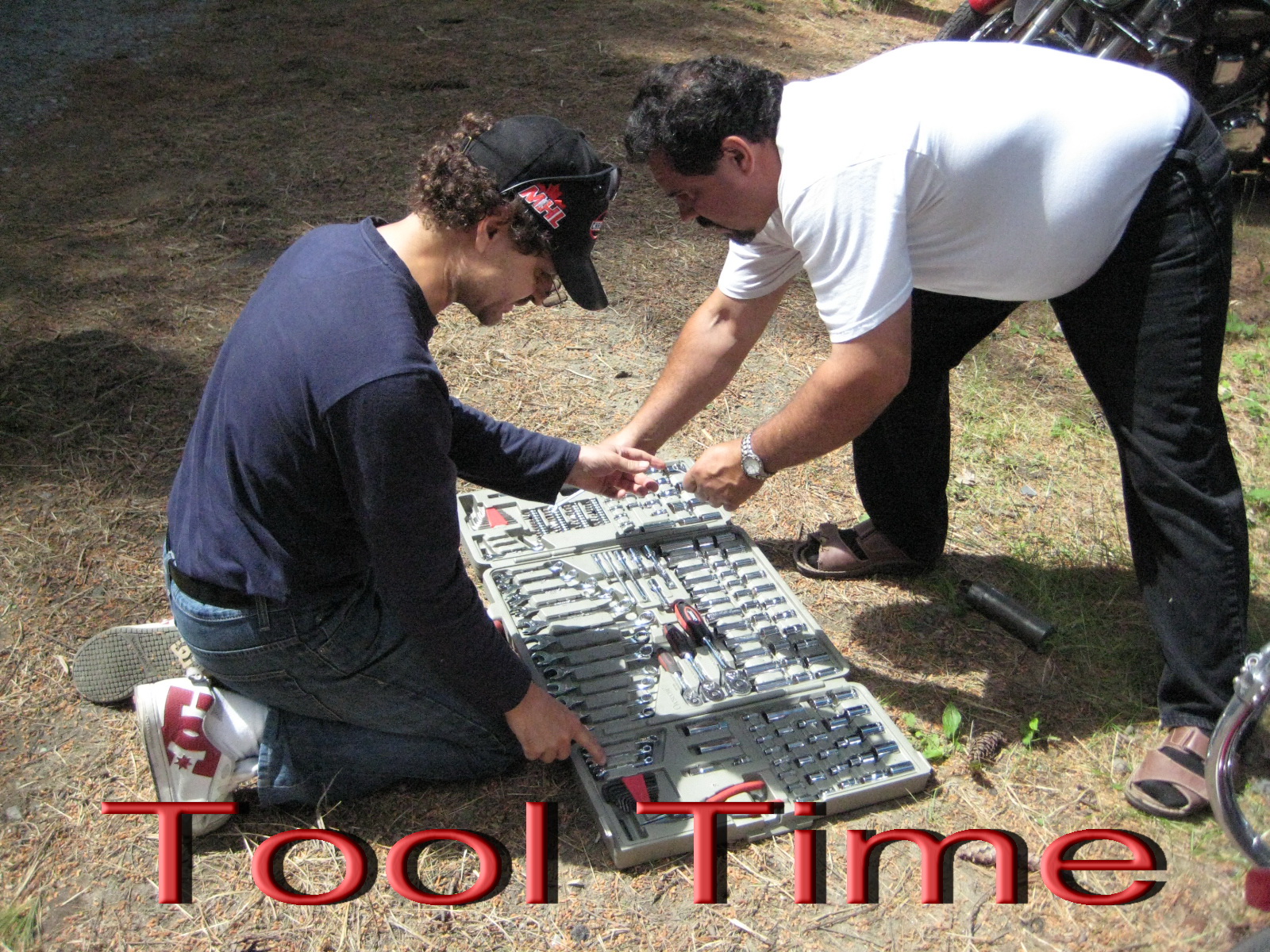 Reed, Petra, Tony and Jodi arrived Sunday afternoon and quickly set-up camp
Well, this year we had a few mechanical problems...
Firstly, Tony's rear-view mirrors were loose and required adjustment.
Secondly, after a diagnosis and a quick repair of my Kawasaki Nomad's rear drive shaft seal, the experience left a chink in my Visa armour and set me back $387. Cha-Ching!
Click here for video

While my bike was in for service on Monday, Fred decided we take a mini ride to check-out Palisades Road. So, Fred Tony and I, on Lynn's bike, went for a little spin.
Descending Tonge mountain off Rte 9N and into a scenic overlook, Tony pulled along side of me and alerted me of his Harley having severe engine knocking/ticking noise and lack of uphill power. Upon close inspection, there was a surprised look on Tony's face, the bike's dipstick reading was zero oil.  HUH? She was down 2 quarts of oil.
So, the bike was running on deprived oil. Yikes! No wonder the bike was making such a raucous mechanical racket.
Lucky for Tony, another Harley rider at the scenic pullout had a quart of Harley oil in his saddlebag.
We managed to return back to base camp without incident.
Tony had an old litre of Slick50 kicking around, for motors, and decided to pour it into the bike and bring the oil level to spec. He figured that would help and fired up the bike. But the bike smoked incessantly.
I lifted the plastic bottle of Slick50 to read the fine print and felt some weight...as if oil was still inside. I unscrewed the cap, looked inside and noticed white sludge deposits in the bottom. Hmmmmmmm...
After seeing the sludge, Tony decided a full fresh complete oil change was in order and to dump the crankcase oil. The Slick50 was crap...no wonder the bike was smoking profusely.
Luckily for Tony, across the street was a Harley store equipped with all the parts for an oil change. All he needed was a oil filter wrench and an oven pan from Wal-Mart to complete the task.  Off to Wal-Mart in Queensbury NY 12kms away.
Well, the purchased oil filter wrench slipped and wouldn't work...arrrrgh!
Again, luckily for Tony the camp caretaker, driving by doing his rounds, had an oil filter wrench under his pick-up seat that worked. Yeah!
Next day, a ride to Vermont was in the plans.
In the morning, Tony hits the starter button of his bike, the engine cranked a couple of times and then it groaned to a stop.  A dead battery...Arrrgh!
After trying to start the bike with push start and a boost from a campers pick-up, Tony decides to pick-up a fresh battery or get a quick battery charge.
Lucky for Tony, next to the campground, at the Forum parking lot, service representatives of  YUASA Batteries were conducting battery checks for bikers.
After hearing Tony's plight, they offered him an un-saleable scratched battery that fit his bike at no cost.  Yes, it was absolutely "FREE".
Again, to make sure the bike would start, Tony waltzed across the street to the Harley store bought a couple of new spark plugs and installed them along with the fresh battery...and then Voila! the bike fired up.
What a lucky guy, Tony! First, a Harley rider with a quart of Harley specific oil in his saddlebag in the middle of nowhere. Second, a caretaker with the proper oil wrench...of all places a State campground. Third, YUASA Batteries offering him a fresh battery at no cost right next door to the campground. WOW!
A pleasant uneventful ride into the Green Mountains of Vermont assured Tony the bike was fine. Whew!
Posted by Al at 5:35 PM